Heartwarming, candid, lighthearted – not exactly the sort of words you’d associate with a serious topic like HIV and AIDS but it’s precisely these sentiments that’s portrayed in the film, “I Hugged the Berlin Patient”.

An independent film by local directors, Edgar Tang and Dzul Sungit, it comes at the appraisal of being “an inspiring journey” by veteran local film maker, Eric Khoo. Perhaps the next IloIlo in the making? Watch it for yourself in support of local independent films (even if it’s not internationally acclaimed, yet).

Inspiration for the film all began one fine evening when Edgar, himself a cancer survivor, heard the news of the world’s first man cured of AIDS – Timothy Ray Brown, dubbed “The Berlin Patient”. In a moment of spontaneity, Edgar decided to pack his bags and chart off to Berlin. To do what, you ask? To hug Timothy! Not to be trivialised, the film explores in greater depth the physical and psychological impact of being struck with a terminal illness.

Almost as if in telepathic connectivity, Edgar instinctively traces Timothy’s journey to recovery. He traverses across three continents, connects with his closest friends and the doctor who cured him, and ultimately culminating in a climatic face-to-face meeting with Timothy himself. Edgar’s charming sincerity, quirky sense of humour, and vivid expressions throughout the film will endear him to any audience.

The film cleverly intertwines reality with a fictional narrative, told in lyrical artistry.

In conjunction with World Aids Day on 1st December, the World Charity Premiere of the film will be held on 2nd December, 7-10pm at The Grand Cathay. Net proceeds will go to Action for AIDS for their programmes on AIDS Care, Education, and Advocacy.

Watch for a cause! Get your VIP tickets (includes a cocktail reception) on Peatix: http://berlinpatientfilm.peatix.com

Another notable charity event on Peatix: The Hawker Sessions 04 – Instead of eating out at a restaurant on a Friday, how about spending less by dining at a hawker centre and giving what you would have spent otherwise to Tan Tock Seng Hospital’s HELP (Help the ElderLy Patients) initiative! Get tickets here.

Image and video credit: I Hugged the Berlin Patient 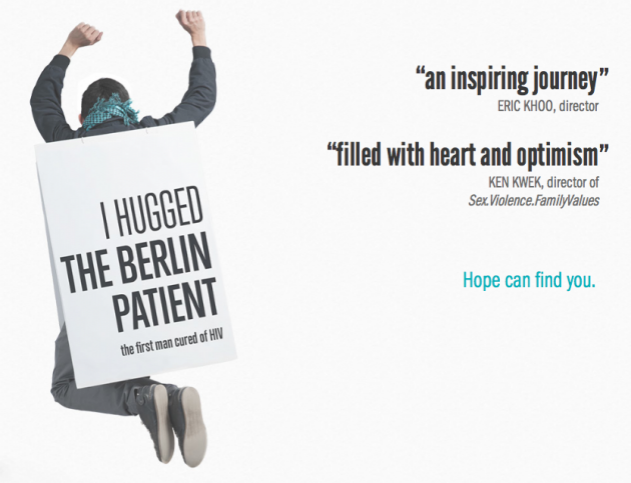 [Newsletter Exclusive] Win a pair of tickets to watch indie documentary, I Hugged the Berlin Patient