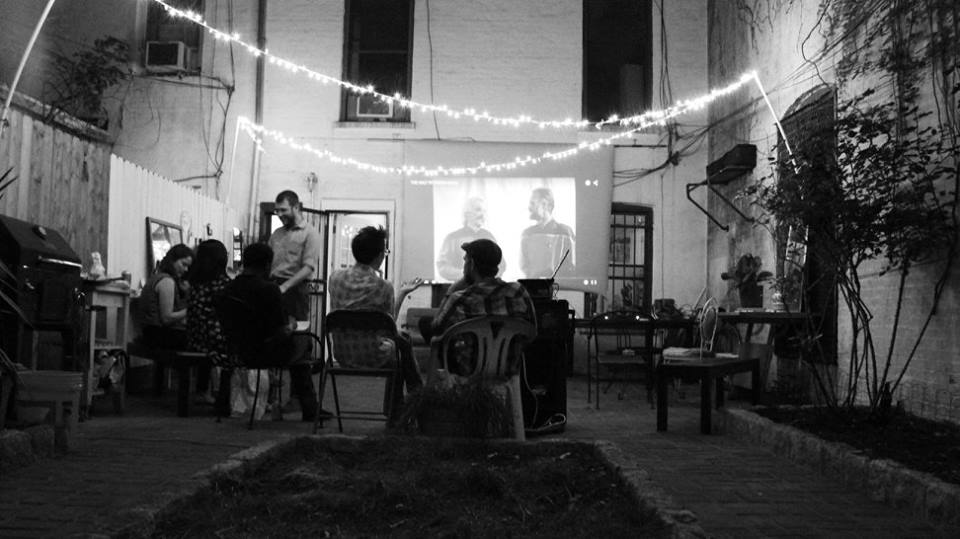 On the outside, Park Slope’s The Sloodge looks like it might be occupied by any one of the neighborhood’s young families just trying to get by on three million dollars a year. But inside, the house teems with artists and their creations; its residents comprise writers, photographers, actors and musicians, while at any given party at The Sloodge–always open to the public–these mediums can be seen coursing kaleidosopically through the evening.

We sat down with The Sloodge’s mastermind Matt Proctor, an erstwhile wedding DJ who has transposed his powers of curation and mastery of ceremonies to create what has become one of New York’s most enthralling evenings that effortlessly and effectively walks the line between performance and party.

Above: The Slooge’s fabled backyard. Photo by Justin Kirk.

What do you think it is that makes The Sloodge so unique?

What makes this place different is that it’s a house and people do live here. So we’ve had bbqs and parties and the house was already a social place, but as soon as I got here I was like “man this needs to be some sort of venue.” So generally speaking the evening starts in the backyard—we have this stage out back. Typically the parties start with poetry—no microphone or anything like that. A bunch of flower children sitting in the yard just listening.

Personally, I’m in a band, I’m interested in theater and I write. And the house has always been that–it has writers, photographers, ect. It’s sort of like a squat art house.

What is your approach to curating artists who will perform at The Sloodge?

A lot of it, just like most things in my life, was just accident. But for me, as an artist and as an observer, a lot of the work in New York seems safe. Even the stuff that’s trying to be risky…they’re going down the same avenues. You can tell they were educated about how to be a performance artist from their college.

There’s this romantic idea about what New York was like in the 70s when it was this scary place–it was just a squat, the whole city was falling apart. And so it fostered this raggedy, dangerous art. And not that I’m super into danger–I’m just interested seeing things that are going to make me feel, and that are maybe eccentic–things that can make me think. I’m more interested in that than in some kind of cohesive, sealed-off comforting emotional experience. 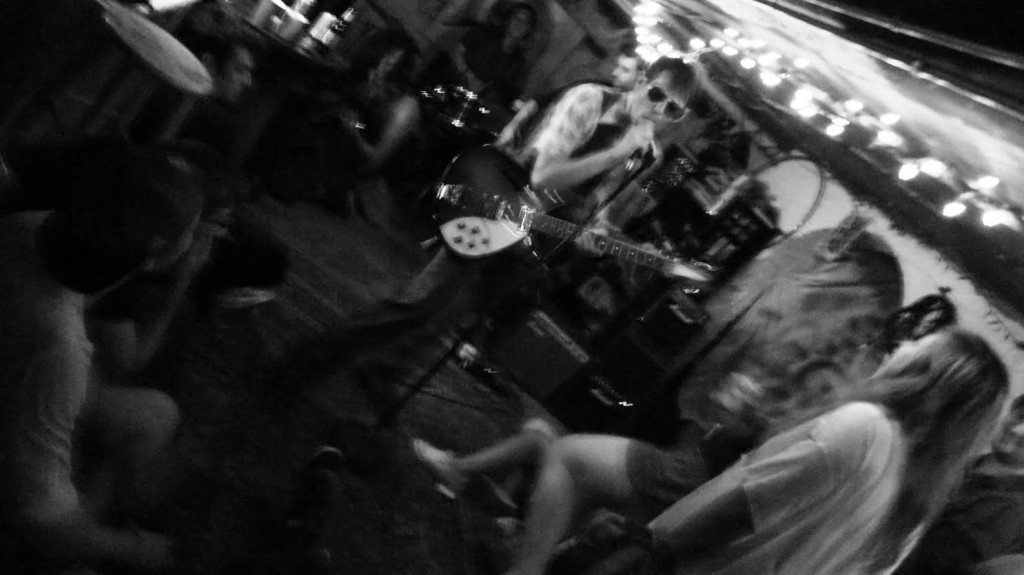 Above: Matt himself rivets Sloodge-goers with his band Holy Smokes. Photo by Justin Kirk.

Where do you go to find the eccentric and thought provoking acts The Sloodge is known for? What has been one of your favorite acts?

It’s beautiful when you can combine a lot of different styles, which is what I strive to do when organizing and curating. I go to a lot of open mics, and a lot of open mike are just like…embarrassing. The person on stage is probably crazy. Like legitmately, probably should be in an institution. Because it’s an open mic, literally anyone can get up there. And everybody who’s there is kind of a sad guy that’s just waiting for their turn and getting wasted. They’re really scared…but every once in a while you’ll see people that really broadcast.

Probably my dream performer to come was this dude named Ken Mills. And Ken Mills is this amazing, just very purehearted guy. He gets up on stage, he doesn’t have any accompaniment, and just sings by himself. He kind of snaps his fingers and taps his feet, but sings these very brassy, 60s brill building showtunes. You can tell he’s really into Barbara Streisand or Dionne Warwick. But he’s this black dude who’s probably 40 or something. He’s a lifelong performer. I had seen him at a lot of open mics–I thought he was fantastic because he has this sort of raw, unfiltered quality. And I brought him into the house…because I wanted to maybe like foist him on unsuspecting people. 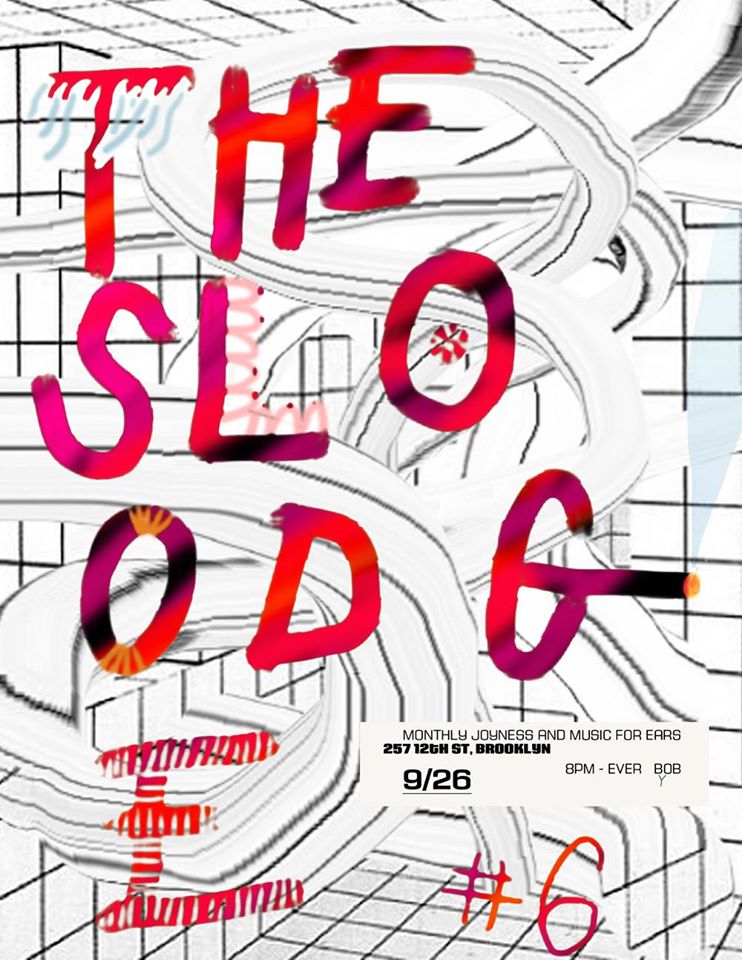 Above: The Sloodge is generally acknowledged to have some of the better party posters in Brooklyn. Poster by Sloodge Artist Petr Pawlowski.

Let’s talk more about these unsuspecting Sloodge-goers. Who exactly attends your events, and what tone do you try to set?

It’s really weird the crowd that we get. We get actually a pretty cool, sexy crowd. And I don’t know where they’re coming from. But because there are 7 people that live in the house, and because their friends branch out, you do get this collage.

And that’s another part of it–because it’s a house, we have an opportunity here to make people feel at home. I think the attendees are probably riding the fence between being in a typical NY party mode where it’s like “I’m terrified of everybody here because they’re so smart and sexy and successful” and “well, it’s just a house.” It’s kind of sloppy–just this hodgepodge of refuse, but it’s also very welcoming, and a beautiful space.

The goal in presenting weird things is to get them at ease. To be like “look, this not going to be a typical New York thing where everybody has to be scared of each other and it’s this networking opportunity. Come here and get involved.” 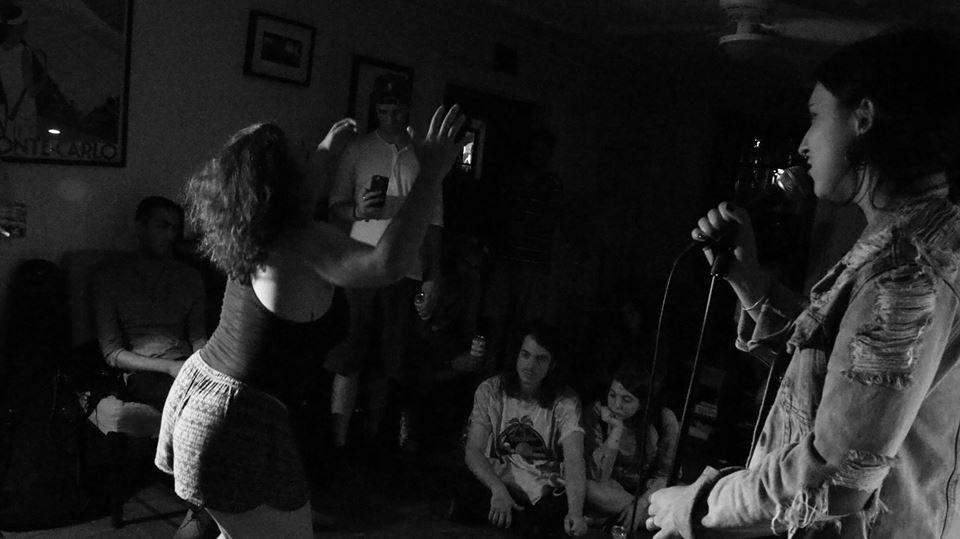 Above: One of The Sloodge’s more popular performances, “Prisoner of Conscience,” by Sloodge Artists Caitlin Michener and Kiki Sabater. Photo by Justin Kirk.

When you landed in New York, how did you go about carving out the creative space for yourself that eventually became The Sloodge?

I know that for the first few years I lived in New York, I spent all my time walking around and feeling like there was nowhere to land. I literally didn’t know where to go to get involved. And I feel like when you’re trying to foster a collaborative environment, the tissue that holds everyone together is spending time together, having a meeting place where you can come and it’s not some kind of antiseptic rehearsal space. So for me it was a combination of things; I’ve always envied that house show/DIY thing yet I couldn’t find it.

Would you rather be devoured alive by a bear or a shark?

Sharks kind of scare me because I’ve heard that their skin will cut you if you touch it, it’s so rough. I believe that if a bear was going to kill you–and maybe this is wishful thinking–but I’d like to believe it would be a benevolent thing, like “I just want to eat you, go to sleep.” 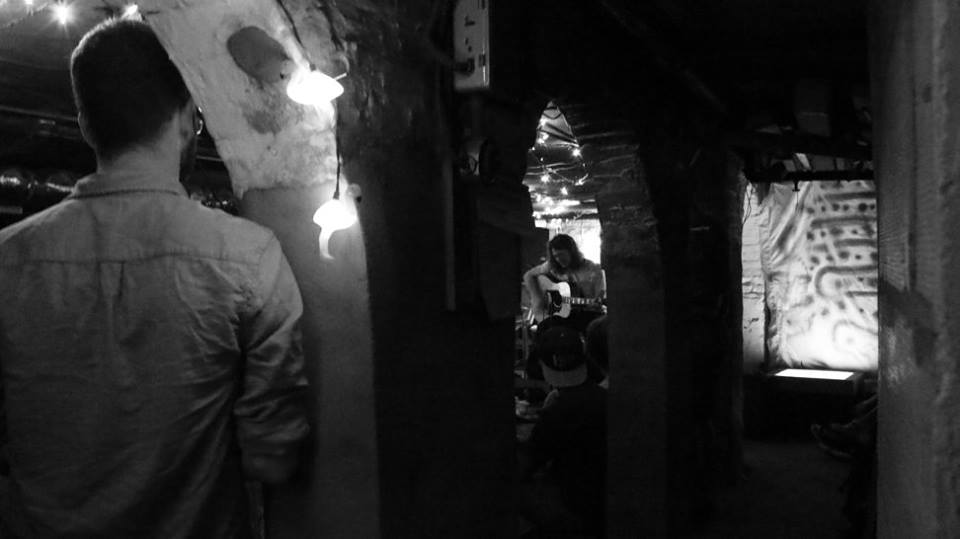 Above: the basement of The Sloodge. Photo by Justin Kirk.

Is event organizing something that comes naturally to you?

I’m a very introverted person. I love doing this because I get to curate, and I want to be the guy that gets to show my two cents about how this kind of thing should be done. I was a wedding DJ and master of ceremonies for two years in Columbus, OH. So that was kind of a similar situation, where I was hosting this thing with 200 people and I had to make all the announcements and wear a tuxedo. I felt similarly awkward about it, but I wanted to do it because I love music and making playlists is a big thing now–and a party is like a living playlist.

One of the inspirations for the party was this idea of “Check out what we found this month! We went out, and this is what we saw, and we’re bringing it back, because it was the coolest shit.” It’s sort of about getting rid of those distinctions of talent–respecting the work of artists and bringing in radical points of view. 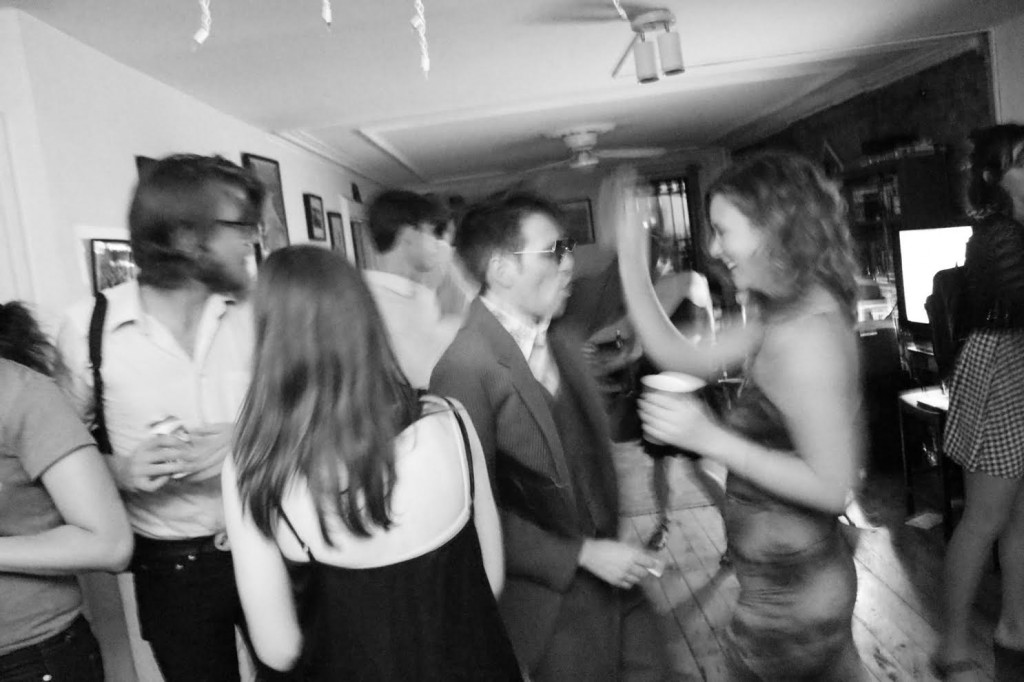 Above: an artist’s approximation of what it actually looks like to attend Sloodge events. Photo by Justin Kirk.

What is the foulest thing you’ve seen or heard of in New York?

I heard that the first apartment I lived in had a previous tenant that kept his urine and his fingernails in a jar in his closet. And when the current tenants moved in, that was like, there. And they had to like get rid of it. So that’s pretty fucking disgusting. 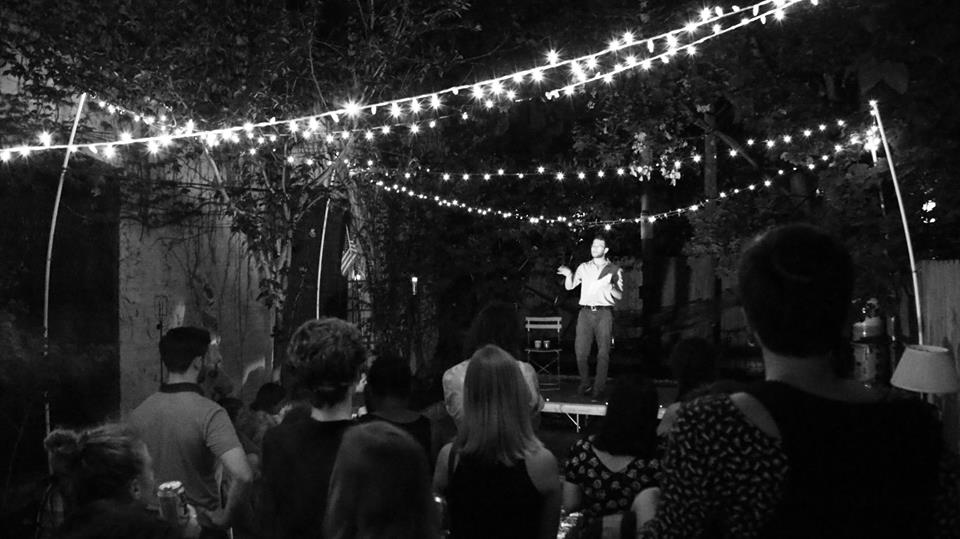 Above: an outdoor performance to start out the evening. Photo by Justin Kirk. 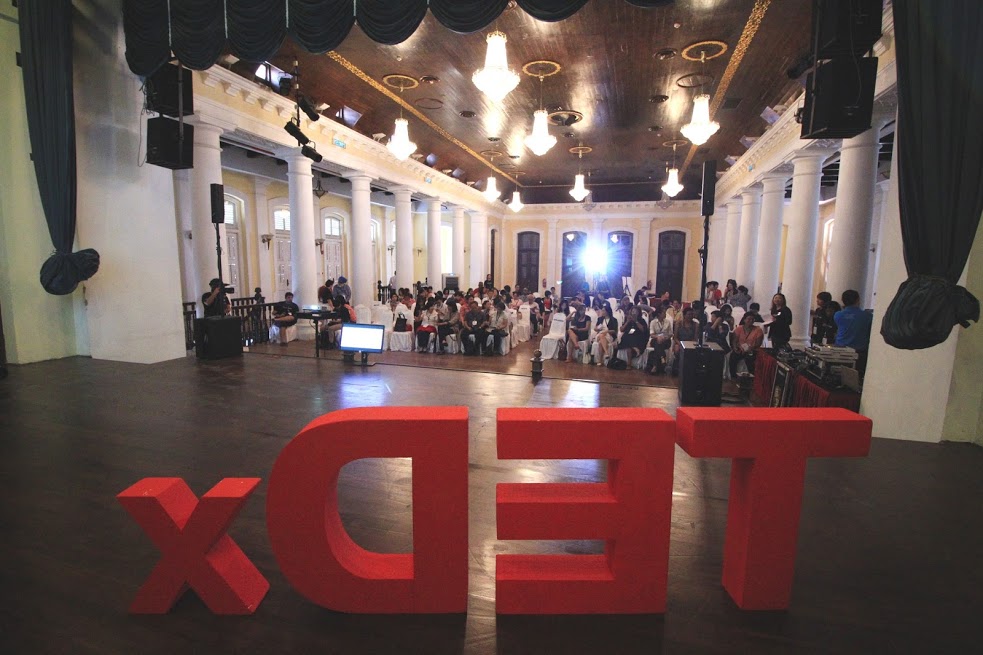 Behind the Scenes with TEDxWeldQuay: Challenges abound, but first and foremost, community driven

Behind the Scenes, Happenings, Inspiration